M Is For Monster 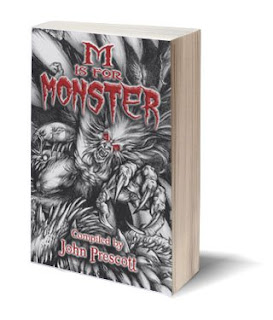 This is where my relationship with Dark Continents began.
Back in 2010 I was asked to contribute a story to John Prescott's amazing antho "M is For Monster". Each of us were given a letter of the alphabet, I received "Y" and wrote a story called "YHWH".
It was very well received and I was compared to Clive Barker, a literary hero of mine - so all good.