Back in 2015, mid 2015 if I remember rightly I was contacted by a colleague I hadn't worked with for a while - Adrian Chamberlin. He told me that he was putting together a small collection of novellas with "war" as the theme and would I like to be involved - well of course I would! I will admit it took me a little time to write the story because I wanted to find the right story / angle - anyway, I move to France really helped me and I'm glad Adrian (and Terry who owns TEP) liked it enough and it actually closes the book! It was an honour to be part of the TOC and work with some great writers.


Well, the book has just been released - a great cover by Ben Baldwin too.


War, the breaker of hearts and minds, the bringer of death and destruction, the doorway to a darkness, deeper even than the night of human conflict. The supernatural underbelly of war exposed in this stunning collection of novellas by Richard Farren Barber, Paul Edwards, Anthony Watson, Adrian Chamberlin, Mark West and Dean M Drinkel. 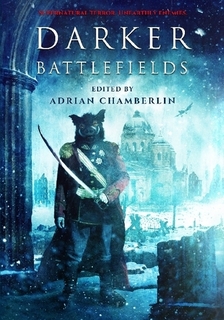