Really really happy how this turned out - here's the official write-up:


The Thirteen Signs
The stars have always held a fascination. The yearly rotation of the constellations guides ceremonies, rites, symbols, prepares for the harvest and sows the fields. More than merely celestial bodies, they seem to have some uncanny relationship to the affairs of humanity.

The signs that designate the zodiac may portend good but every star sign has its dark side. An association seen both in popular culture and criminality.

As the stars wheel through the seasons, we grow older. Some grow wiser, others stranger. Some choose to listen to the better angels of their nature. Others brood over the fires of anger, cruelty, revenge. In the end, though, the course of the stars, and our fate, is fixed. A grinning skull punches its way through the belly of the sundial. A skeletal hand points towards the ultimate destination: The grave.

The stories in this anthology, expertly chosen and edited by Dean M. Drinkel, play weird and dissonant variations on the music of the spheres. They pluck the dark potential from each zodiacal sign, the better to wring delicious shivers from the reader. All the horrors have been fictionalized for your convenience and safety.

All thirteen – which are:

The Order Of Aries
by Mark West
Mike Decker is asked by an old friend to rescue his daughter from a small group of Satanists. He discovers the job is a lot tougher than he'd originally thought and things turn nasty and painful.

Come Join The Blood Parade
by Lily Childs
Ancient bloodlines and the carving of beasts bring terror to green and not-so pleasant England.

Seven For Eight
by Romain Collier
The bakery shouldn’t have that many people in it at closing time, surely? The rain is pouring and the lights go out. Then comes the first scream...

Carapace
by Raven Dane
A spoiled and indolent young nobleman gets a rude awakening, one with horrific consequences.

Leo
by Tim Dry
The story of a young man who exacts a terrible revenge on his abusive father.

Solomon Carson And The Death Of A Virgin
by Trevor Kennedy & Robert E. Tate
A tormented and dejected young man, who may or may not be mentally ill, receives demonic messages and diabolical demands from another realm

Leeber
by Christine Dougherty
A hitman and his target couldn’t be a more star-crossed combination, but is love stronger than fate?

The Scorpion Dance
by Amelia Mangan
A secluded Hollywood mansion. A faded musician. His private obsession. A dance of death, sex, rebirth, revenge.

A Sorrow Of Sweet Pipings
by Jan Edwards
What could a boat trip offer her beyond sun, sea and sand? Darkness beneath the sun.

Ganymede
by Emile-Louis Tomas Jouvet
A being from the stars visits the past, present and future – what message does it have for the planet and one man in particular?

Hooked
by James Everington
A paranoid holidaymaker is unsure if he is caught in a trap or is merely bait for someone else...

Worshipping The Snake
by Dean M. Drinkel
Jules meets Frank at a party, does he really know what he’s let him in for? Does it really matter? After all, what has he got to lose? 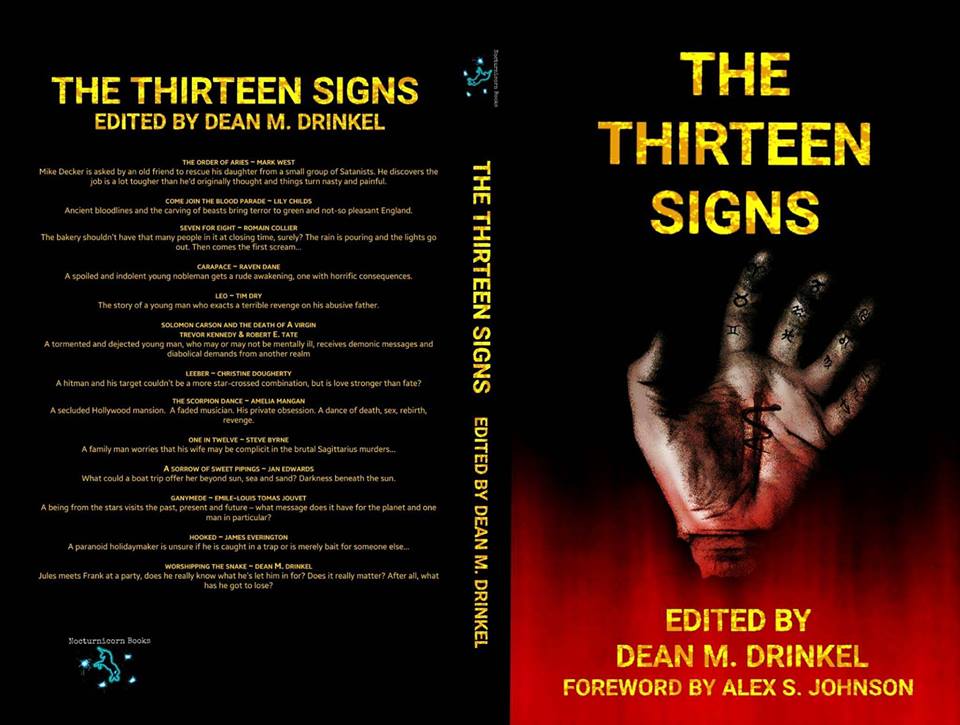 THE THIRTEEN SIGNS KINDLE LINK
Posted by DeanMDrinkel at 05:50