Proud to announce that my new horror anthology "The Bestiarum Vocabulum" has just been published by Western Legends Press. It is the second in the Tres Librorum Prohibitorum series of books and is the follow up to the Demonologia Biblica.  It is full of some amazing talent and has a great cover by James Powell.

Would look great in a Christmas stocking ha ha
dx

It's available on Amazon - here's a link to it:

Well, I only went and did it again - Won "Best Action Screenplay" at the Monaco Int. Film Festival - this past weekend - well done to all the winners - I've got to get behind the camera in 2014 and get this one made :>)
dx
Posted by DeanMDrinkel at 04:00 No comments:

Hi - if you get the change - check out a short interview with me in the current edition (December) of French Property News - where I wax lyrical about my short stories and the influence of Paris.
Cheers to the editor and the team!!!

Brilliant news - proud to announce that I'm up for another screenplay award at the Monaco International Film Festival in December - Roland Joffe is the President of the Jury - so looking forward to chewing the cud with him.  My screenplay is for a new short film called Splinter - an action story set in Paris (natch!).

If you're interested - more info about my nomination etc (with a great photograph of me taken by the very talented Barbie Wilde) can be found here:

Posted by DeanMDrinkel at 11:34 No comments:

Also just out - The Horror Society's Best Of Anthology including my story Weird.  Available everywhere but here's one of the links:

Now this is rammed full of great stories and writers - check it out!
dx 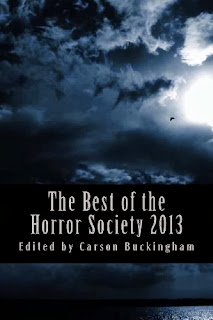 Posted by DeanMDrinkel at 06:42 No comments:

So here it is - a cracking anthology put together by Joe Mynhardt including some amazing amazing writers - I'll say no more - except for - CHECK IT OUT!!!!!! It's available all over the place but here's the link to the UK Kindle version. 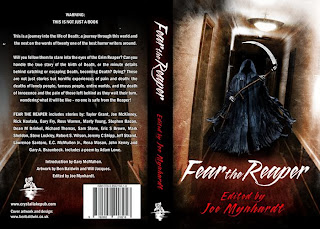 Posted by DeanMDrinkel at 06:38 No comments:

Okay - let me catch my breath - been a manic couple of months since I last posted....so let's start with this:

My blogpost on Crystal Lake Publishing re my new short story in the "Fear The Reaper" anthology....good place to start....

Within A Forest Dark

Hey- info on my horror short story collection "Within A Forest Dark" which was published today by Dark Continents.
Enjoy
dx

Originally published in e-book form in 2012, this revised and updated version is a gathering of short stories inspired by the layers of hell from within Dante's Inferno. Bradley - a man consumed by the beautiful and mysterious Emmanuelle. Several murders in Paris. A husband who believes his wife's ghost still haunts the home they shared. Will this collection of tragic lovers be able to maintain their humanity in a world awash in chaos and blood? Or is their fate already decided within the pages of an ancient book reputed to be written on human skin? Dare you turn the pages to find out? Also included, the additional bonus story "Dies Irae".

Posted by DeanMDrinkel at 12:14 No comments:

Email ThisBlogThis!Share to TwitterShare to FacebookShare to Pinterest
Labels: Dark Continents, Within A Forest Dark

Kneeling In The Silver Light 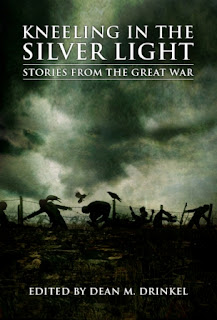 Posted by DeanMDrinkel at 03:20 No comments:

Excellent, excellent - just found out that a short story I recently wrote is now up for the Horror Society's inaugural "Igor" award - can't say any more at the moment until the official announcement in September but the story will be appearing later in the year in the "Best of " Anthology...keep your eyes peeled!
dx
Posted by DeanMDrinkel at 06:21 1 comment:

If you get five, check out this brilliant interview / article about my dear friend Barbie Wilde.  As we know (hopefully!) Barbie is part of the Hellraiser family as well as a great writer who has contributed to a couple of my anthologies to date and will appearing in a couple more in the near future.
Nice one!
dx

A brilliant in-depth / honest review appeared on Amazon today by Chris Hall.
He's obviously spent a lot of time reading each of the stories - so very much appreciated.
With 26 writers, not everything is going to appeal to everyone - but as I say he's been very honest.
If you haven't yet checked the antho out, I'd thoroughly recommend it...well, I would wouldn't I!
dxxxx

Brilliant - just got back from the Cannes Film Festival to find out that my new horror anthology "Cities Of Death" has been published by Static Movement and is available in paperback - great news.

Since I posted last, it's also got a fantastic new cover too :>)

Check it out
dx

Posted by DeanMDrinkel at 02:49 No comments:

...are One today - Happy Birthday and thanks for letting me play in you sandpit...
dxx

Secondly, I'm happy to announce that TDB will be the first in a trilogy of Horror / Dark Fantasy Anthologies launched by Western Legends in 2013 under the banner "Tres Librorum Prohibitorum".  The second volume will be called "The Bestiarum Vocabulum" and is due out late Summer 2013 with the final anthology released in December.  All three have amazing cover art by James Powell.

More news when I'm allowed to release it.

More info can also be found at Western Legends' site:  http://westernlegendspublishing.wordpress.com/
Posted by DeanMDrinkel at 10:48 No comments:

...well, where to start with this.

First, I guess to say - IT'S OUT and doing very very well both sides of the Atlantic - particularly on the Kindle - it looks beautiful in paperback as well so why not buy it :>)  It was officially launched on the 24th March and raced up the Amazon charts.

Here are the links

Posted by DeanMDrinkel at 10:44 No comments:

Wow - it's been a couple of months since I've posted but that's because I've been hard at it working on the anthologies.

As will be clear over the next couple of posts!!!

Hope you're all well.
dx
Posted by DeanMDrinkel at 10:38 No comments:

I was also busy during December finishing the editing of my exciting new anthology "The Demonologia Biblica" to be published late Jan / early Feb by Western Legends Publishing.

The final TOC features stories by:

The cover is just being updated and once completed, I'll post a pic and a link to where the book can be purchased.

Well done all.
dx
Posted by DeanMDrinkel at 11:24 No comments:

December was a busy month.

First up was my nomination for my short script "Bright Yellow Gun".  It won "Best Action Screenplay"....now all I need is the funds to get the damn thing made!!!!

And was really exciting is that a good friend of mine who had appeared in many of my early film / theatre productions, Ed Ward, was also there and won Best Supporting Actor!!!!! 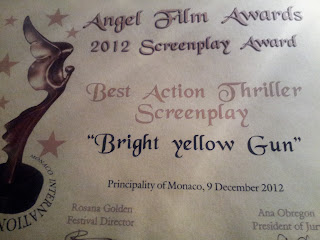 Posted by DeanMDrinkel at 11:14 No comments: