Here is the official write-up:


"A collection of terrifying tales by some of the most popular genre authors going, all based on the theme of colour ...

THE SAND WAS MADE OF MOUNTAINS BY ANTHONY COWIN
A travelogue of escape from human monsters trying to destroy the world and the unspeakable creatures reaching beneath it.

THE BLACK GOD BY PAUL M FEENEY
Two bloggers set out to explore the abandoned town of Pripyat, on the fringes of Chernobyl, regaled by the local myths and legends from their guide. But some myths are closer to the truth than anyone would wish.

THE WHITE ROOM BY RAVEN DANE
What could be less sinister than a pristine white ballroom? The only bright, spotlessly clean room in an abandoned, decaying mansion? White is a symbol of purity, isn’t it?

RESTORING SCARLET BY DAVE JEFFREY
A mortician has a special kind of relationship with his damaged, deceased clients. He can fix them; make them what they once were. But what does he need in return?

XANTHOS BY WAYNE GOODCHILD
John, a writer, has a fear of the colour yellow...so much so that gave up his vocation because of it. But now he’s writing again, his magnum opus ...nothing can go wrong for him ... surely?

BORN FROM THE GREENS BY ZAK A FERGUSON
Marcus is grieving. Through his grief his solace is his new obsession, his overgrown garden of which something grown, something greater awakens, something born from the greens.

THE SPIRITUAL ROOM BY CHRISTOPHER BECK
Tyler’s world was flipped upside down the day his father died. But the real horror came when his mother invited him into the spiritual room.

THIS IS THE COLOUR OF BLOOD BY MARK WEST
Mike Decker is hired by a Russian billionaire to track down his daughter - an easy way to make money. But nothing’s that simple, especially when a missing persons case gets mixed up with vehicular destruction and black magic.

ANTHROPOCENE BY CHARLES RUDKIN
The world is monochrome but then a Dragon appears in the cold white wastelands of Antarctica...will colour return to the Earth...?


Check it out if you can!
dx 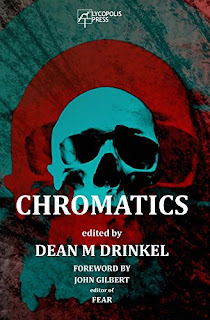